skip to main | skip to sidebar

Got up early and headed out for home. Brian was determined to be home by May 1st because it was the premier of the movie “Ironman”. Hey—we’re a family of comic fans—what can I say? Kyle had bought tickets already so (for the *midnight* show)—we had to be home.

After a couple of hours, we stopped at IHOP for breakfast. The special for the day was a caramel and banana stuffed waffle—which Grace begrudgingly shared with Brian.

Back on the bike…and off we went. It turned out that it was a good thing we didn’t go to Bakersfield the night before—because we went a different way out of Barstow: towards the ocean. Instead of heading northwestward to Bakersfield, we headed on a more westwardly route towards Santa Barbara and then took the coastal route most of the way home. The ocean air was quite a bit cooler…but well worth it with the views we had on the nearly 250 miles of coastal roads. 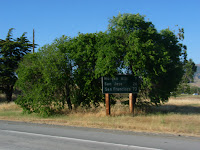 We made it home by about 6:30pm Pacific time. Everyone was home—even the cat—although Tora managed to look “unimpressed” by our arrival for about 20 minutes…then yowled for Grace to take him upstairs to his food dish. It was great to be able to hug Kyle and Kevin good and hard.

Brian’s mom had a hot stew waiting for us and that was WONderful. We talked about the trip and then tried to unwind.

And yes…we went to the midnight “Ironman” show—and it was also neat because a lot of the boys’ high school friends were there—whom we hadn’t seen in quite a while—it was almost like a reunion. Oh…and the movie was *hella-COOL*--be sure to stay to the END of the credits!

What a way to end a really great adventure! We thought of all of you along the way—y’all were great company.

Posted by motobabe at 9:26 PM No comments:

Got up early, had breakfast in the cafeteria at Maswik Lodge while checking email and trying to get caught up on the Blog. Then, jumped on the bike and left the Grand Canyon. Well…first we went back to the Watch Tower Point (which was part of the Desert View tour we took yesterday) so that Brian could get one of those souvenir pressed pennies with the Grand Canyon stamped on it.

Grace went to one of the gift shops and, while waiting for her to finish, Brian was in the parking lot talking to another couple who had ridden into the Canyon on a motorcycle. This couple was from Canada. They had said that coming into the Canyon was a bit difficult because of the high winds and dust storm. Thus forewarned, we took off and headed westward—and ran smack in the middle of the very high winds and dust storm. We had experienced gusty conditions during the trip before (getting over to Four Corners), but that was nothing compared to what hit us head-on just before getting to I-40. This made picture -taking for Grace a rather dicey proposition. At one point, she told Brian that the winds (plus the speed of the bike) nearly ripped the camera right out of her hand.

We could *see* the dust storm as we approached. Then…we were IN it. As soon as we hit it, we both shouted, “DAMN! I’m getting sand INSIDE the visor!” Visibility went down to nearly *zero*. The windshield was so brown as to be nearly opaque. Brian pushed steadily forward—and soon we were out of the dust storm…but NOT out of the gusty winds. *THAT* stayed with us *all day*! Grace did her best to “streamline” herself behind Brian—otherwise, she became a veritable sail on the back of the bike. Brian did his best to keep the bike upright—which meant leaning into the wind at about a 40 degree angle. Unlike getting to Four Corners—where the winds would occasionally just gust up and subside, this was a constant headwind, beating at us relentlessly. 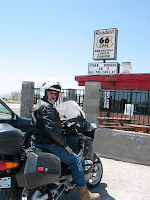 We got to Seligman, Arizona—one of the places we had intended to visit. It is touted to be the “birth place of Route 66.” We stopped at The Road Kill Café where we were determined to have a meal (as recommended by our friends Jean and Dean)—because “it’s more tender if it’s off yer fender.” Brian had “Caddy Grille Patty”—a hamburger; Grace had “Vulture and Veggies”—a turkey and ham club sandwich. It was well worth taking this route to get there.

Brian had said that we might be able to make it all the way to Bakersfield, California—which would have made it about a 605 mile trip. Grace said, “Ok…I’ll give it a go.” But the winds continued on and, instead, we stopped off at Barstow, California—about 130 miles short of Bakersfield. We were both just that beat up by the wind. We found a Best Western, ordered a pizza and collapsed.

Posted by motobabe at 2:52 AM No comments: